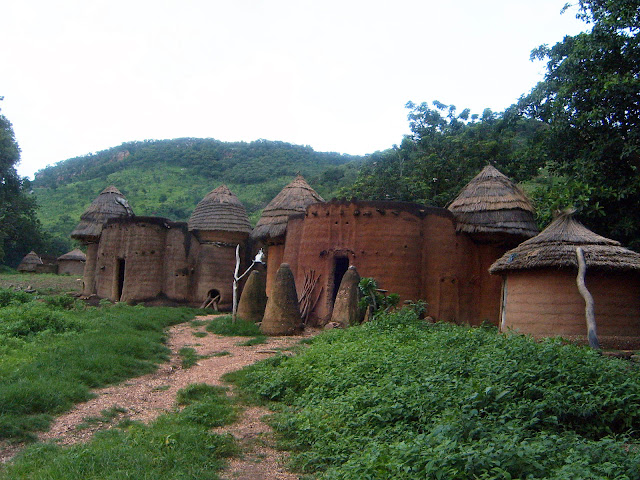 3 Vil 9 b Batammaliba (Somba) (Benin (Dahomey) n Togo N)
Ihe Batammaliba (also known as lamberma and Somba) live in the rugged Atakora mountain range of northeastern logo and northwestern Benin sharing with their Gur relatives in neighbouring Burkina Taso a keen interest in architecture 1 his IS evidenced m part in the name which they chose to call themselves, Batammaliba, a term meaning the 'people who are the real builders of earth' Each building is constructed by a single architect-builder (otammaii) who 'signs' his work on the foundation with a special symbol A group of community master architects meets for the foundation laying and approves each design
Batammaliba residences each of which shelters a single, generally nuclear familv, consist of two-storey earthen units which share similar formal attributes A west-facing door leads through a small entryway containing several grain mortars to a large, sombre ground-floor area called the 'cattle room where domestic animals and fowl are housed at night Positioned m this chamber as v\ell are the altais of key male ancestors and a platform bed for the senior man of the house A raised kitchen is situated adjacent to the cattle room and serves as the primary means of access to the terrace Also on the terrace level are positioned a sleeping room used by the senior woman of the house and her young children An auxiliary sleeping room and various crop drying and storage areas are found on this level as well At the centre of the terrace is a ritual hole covered by a flat circular stone, the latter being used as a dining table for the family evening meal tventuallv the stone is taken to the cemetery to be used as a tombstone Iwo clay granaries proiect from the front corners of each stiuctuie 1 he southwestern granary contains crops identified with men, the southeastern granary houses the women's crops lerrace level drainage pipes carry potentially damaging rainwater away from the structure
Key features of the house complement human anatomical parts as evidenced in language use, visual attributes, and actions directed toward the house in contexts of everyday and ritual use Among the moie salient of these anatomical parallels are the doorway-mouth, window-eyes, granary-stomach, moi tar-teeth side drainage pipe-penis, sleeping room-vagina, and back drainage pipe-anus I he eaithen core of each building in turn recalls human flesh, the incised surface plaster complements local skin cicatrization patterns When a senior resident of the house dies, the structure is draped with cloths to suggest a youth at the time of his initiation In addition to suggesting human physical features, each house also incorporates mound foi m altars to shelter the soul
Batammaliba religious concerns can be seen in certain features of architecture and village planning as well Each house faces the west (or more accurately southwest) in order to look onto the domicile of the solar deity, Kuiye, in the southwestern sky Key architectural elements, including the earthen 'horns' above the door, the hole in the centre of the terrace, and a conical mound in front of the dooi, serve as a locus for Kuiye worship The female earth goddess. Butan, is identified both with the earthen core of each structure and with special clays and plants taken from a local spring which aie inserted into the foundation Ihe image of a
human which is mapped out on the village landscape in the course of ritual paths is identified with this goddess as well Both attached and freestanding mound-form shrines dedicated to key ancestors are found throughout the house, those of the men on the ground floor, those of the women on the terrace level Other deities and spirits similarly have special shrines or altais within the house, each such sacrosanct power being signalled through special path-form symbols positioned on the building facade which serve to direct gods and worshippers to the appropriate structure for ceremonies